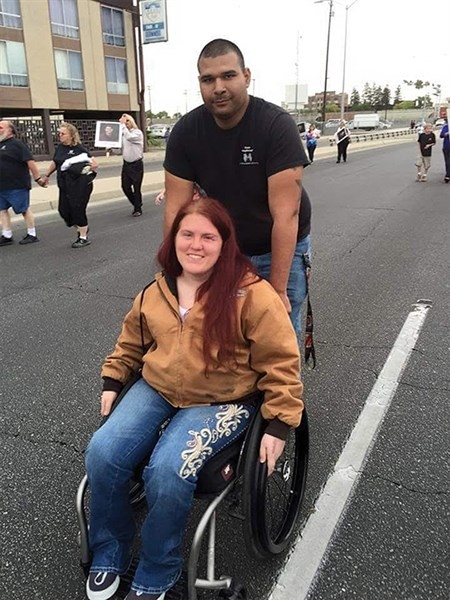 In April 2014, Carter ran two red lights while driving his truck, jumped a curb, knocked down barriers at a gas station on Merle Haggard Drive and crushed then-20-year-old Leann Harris as she pumped gas, and as her 17-year-old sister watched. Carter was driving while drunk.

Nearly everything on Leann was broken — worst of all, her spine. Leann is now a paraplegic.

Before the crash, Leann loved riding horses and driving trucks. Today, she needs help with everyday tasks. Many times, Leann says, she would rather have died in the crash.

“I was a healthy and happy 20-year-old at the time with my whole life ahead of me, filled with dreams and ambitions,” Leann said in a statement she reads to DUI offenders going through counseling courses. “Now, my days are spent with doctors, rehabs and people taking care of me.”

Leann’s sister, having witnessed the crash, has frequent nightmares and panic attacks. More than a year after the crash, the Harris family spends a bulk of its time still in and out of doctor and hospital offices.

While she tries to move on and focus on Leann, it’s difficult for Mary to not remain angry, she said. She remembers the smell of alcohol on Carter when she saw him the night of the crash.

“I just couldn’t imagine someone stepping into a car when they’re that drunk,” she said. “If you’re drunk, please stay where you’re at.”

She said she’s thankful for MADD Kern County for helping guide her through the foreign court process, supporting her family, and giving Leann a venue to vent and inspire — all services provided through "Walk Like MADD & MADD Dash" fundraising.

Today, Leann speaks to DUI offenders, hoping that by sharing her experience with them, they will change.

“I will not let this chair break me or imprison me,” she said. “I will use this as a way to educate and empower people, motivate and strengthen lives.”

To learn more about MADD Kern County, check out local media coverage of the event below: